Today I drove to Columbia Tennessee, to a church that I served as Senior Pastor from 1990 to 1998.  It was my longest pastoral tenure (of three churches) and one that I could have seen as a lifetime appointment.  In fact, our former General Overseer, Bishop Billy D. Murray stated at a conference, “some of you pastors need to make your churches life-long appointments.”  I couldn’t wait to get to him and share that I was accepting his challenge.  Two-years-later, I was appointed as the Regional Overseer of Montana, North Dakota, South Dakota and Wyoming.

The reason for the trip today was to celebrate Pastor Charles Thornburg’s recent graduation from the Pentecostal Theological Seminary, earning his Masters Degree in Counseling.  It was good to see old friends from the church and even some who are not regular attenders there.

Since I had a little extra time (I know, sounds weird doesn’t it) I decided to drive on the secondary highways that I spent so much time on, bypassing the Interstate and the drive that seems more like the Indianapolis 500 than it does a peaceful trip through the rolling hills of Tennessee. 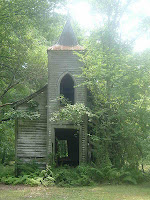 I noticed how much urban sprawl has sprung up between Nashville and Columbia, but I noticed something else that gave me pause to think.  I was absolutely amazed at the number of new churches that have sprung up.  There were new buildings, renovated grocery stores and store front buildings, and one that meets in a bank, and another at a YMCA.  There was even one in an old garage on the side of someone’s house with the service times painted on the overhead door.

Since we are a church-planting movement some things caught my eye that maybe wouldn’t others.  I noticed the grown up grass around them, the trash in the parking lots and the obvious signs of superficial care being given.  I noticed the mainline churches have now added “contemporary” services on Saturday nights with traditional services on Sunday.  This is code for the old folks don’t like the new music and the young folks are bored to tears with the hymns of the church.

There were large churches, small chuches, medium sized churches.  Some offered free oil changes, others offered services in multiple languages.  According the the names of the leaders on the signs, the area has an array of choices.  The signs touted their leader as “Apostle” “Reverend” “Doctor” “Bishop” “Preacher” “Pastor/Teacher” and one was just plain “Brother.”

The names of the church were a little different too.  There were Church of God, Assembly of God, Methodist, Baptist, Catholic, Pentecostal, Christian, Jesus Name, and an assortment of churches named after trees, rivers, streams and rocks.

As I marveled at all of the growth, I couldn’t help but wonder how many folks are connected to all these churches?  Some of them I know from living reasonably close.  There are several in the hundreds, fifty’s and sixties, and a few that have less than a dozen.  I wondered how many of the senior saints would be carried to worship services in a church bus or van (there were some of those churches too), how many would ride their motorcycle, BMW’s, Volvo, Audi, Cadillac, Lincoln?  Coming in every shape, size and background folks will attend the church of their choice.

But I noticed something else too.  I noticed some that have closed, been converted to restaurants and other commercial enterprises.  These are the ones that just didn’t make it.  There were also at various states of decline and death, the telltale signs abundant from just looking at the building and property.

With all of the churches and different ministries, why is it that the majority of people in the community will opt for the lake, camping trip or just plain stay in bed?  Why do these churches die?  Now, we have to admit that some close because of poor leadership, some because of people with vicious territorial attitudes and some who have simply lost relevance.

However, having said all of that, I also believe that many of them closed because the word “Ichabod” has been written over the door (1 Sam 4:21) basically meaning “the glory of the Lord has departed.”  Dead churches lose their relevance because they lose the Glory.  They lose the anointing from the Lord because of their determination to have it “their” way.  You know the type, “I want it how I want it, when I want it, where I want it, with whom I want it…I want it my way.”  They are willing to let the church die rather than relinquish control to the Holy Spirit.  Caught up in their business plans, denominational staleness and lack of compassion, they have totally lost touch with God.

When talking to an old friend today I quoted this verse as the solution:  Sow to yourselves in righteousness, reap in mercy, break up your fallow ground: FOR IT IS TIME TO SEEK THE LORD, till he come and rain righteousness upon you.” (Hosea 10:12) Emphasis mine

Yes, we need to plant new churches, but we need a revitalizing revival to sweep through the churches in America, or else we will continue to be divided and conquered by the enemy of our souls.

I am ready for a real MOVE OF GOD.  What about you?