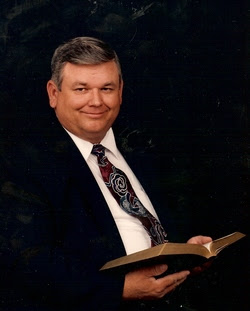 BIOGRAPHY Jesup, Georgia Rev. Charles “Hubert” Flowers, 60, of Jesup, GA, died Tuesday, April 3, 2012, in the Memorial University Health System in Savannah, GA, after an extended illness. The Wayne Co., GA, (personal testimony) native was an old country boy, born and raised in South Georgia. I was a Logger/Trucker by trade, Jesus glorious saved me behind the steering wheel of a Mack truck on April 29, 1980. I accepted the call into the ministry while attending my first year of the Church of God of Prophecy Bible Training Institute in Cleveland, TN, in May of 1981. I accepted my first pastorate in April of 1988, during my pastoral years I pastored two churches in Georgia and two churches in Tennessee. With the exception of accepting Jesus into my life, the greatest decision by far was marrying my beautiful wife, Geri. We have two great kids, Tina and Chuck. They’re both married to the greatest daughter-in-law and son-in-law a father could hope for. Together they have given us four of the most precious grandkids in the world! I enjoy preaching and teaching the Bible, playing chess and playing spades. Most of all with them Grandkids! He was predeceased by his parents: Downing and Vera Flowers, and sisters: Vera Mae and Sandi Drury. Survivors are his wife of 41 years: Geri Davis Flowers of Jesup, GA, daughter and son-in-law: Tina (Rev. Phillip) Minter of Trion, GA, son and daughter-in-law: Chuck (Kelly) Flowers of Brunswick, GA, 4 sisters: Carole (Theron) Medders, Dale (Earl) Watson, Julie Nabb, all of Jesup, GA, Kathi (Alfred) Teston of Brunswick, GA, a brother: Ricky (Lola) Flowers of Jesup, GA, grandchildren: Christian Flowers, Charlie Flowers, Paige Minter, Peyton Minter, several nieces, nephews, and cousins. Funeral services will be 11 A. M. Friday, April 6, 2012, from the Rinehart and Sons Funeral Home Chapel with Rev. J. W. Griffin, Rev. Phillip Minter, and Rev. Harold Hand officiating. Interment will be in the Little Creek Cemetery. Active pallbearers will be: Jay Drury, James Medders, Earl Watson, Jr., Mark Watson, Wayne Flowers, Carson Flowers, Mike Long, and Rooster Manning. Honorary pallbearers will be: Fred Fender, Greg Mullis, Jimmy Drury, Rocky Lane, Ronnie Young, and all fellow pastors. Visitation will be 6 to 8 P. M. Thursday from the funeral home. The Rinehart and Sons Funeral Home of Jesup, GA, is in charge of the arrangements. In Memory of Rev. Hubert Flowers