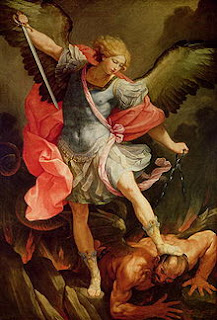 “For we wrestle not against flesh and blood, but against principalities, against powers, against the rulers of the darkness of this world, against spiritual wickedness in high places.” (Ephesians 6:12)

This year is my 30th year in ministry. An accomplishment if you consider those who openly stated that my conversion wouldn’t last two weeks. Of course we all recognize this was not accomplished through my own staying power or abilities, but rather by the grace of God. (Ephesians 2:8-9; Jude 1:24) Yet, we all understand the necessity of keeping our fellowship with Christ fresh by “walking in the light,” (1 John 1:7) in order to do that.

In these 30 years I have seen my share of battles, and to be honest with you, I have the scars to prove it. Most of the battles come from “out of nowhere,” and are not only unwanted, but often come at the most inopportune time. There is a reason for this; we are at war with an enemy who wants to destroy us. (1 Peter 5:8) This enemy will do whatever necessary to overcome us through a frontal assault or one that is not so easily seen. For example; a frontal assault is open for the whole world to be seen. It comes from open persecution by the enemies of God who hate the fact that Christ dwells in us. They openly profess their opposition to the work of God, and those who represent Him. They openly avow to be atheist even in light of God’s word that declares, “it is a fool who says in his heart there is no God.” (Psalm 14:1)

The more subtle attacks are just that, often cloaked in well-meaning people, who feel they are commissioned by God to “keep things straight.” While claiming to have the gift of discernment, it us usually nothing more than a critical spirit and pure suspicion, which, in most cases is unwarranted and unnecessary. From whatever method chosen by Satan, the truth remains that while these attacks always come through people, they are in reality manipulated by agents of a spiritual realm.

At this point, I think it important to add a caveat for those who feel like I am being critical of those who are the bearers of bad news. I want to plainly say that, in the church, when we have difficulties, the Scriptures give us a clear-cut path to solve disputes. (Matthew 18:15-22) The apostle Paul even rebuked the church at Corinth because they were resorting to the world’s system of judgment.

“Dare any one of you, having a matter against another, prosecute his suit before the unjust, and not before the saints? 2 Do ye not then know that the saints shall judge the world? and if the world is judged by you, are ye unworthy of the smallest judgments? 3 Do ye not know that we shall judge angels? and not then matters of this life? 4 If then ye have judgments as to things of this life, set those to judge who are little esteemed in the assembly. 5 I speak to you to put you to shame.

Thus there is not a wise person among you, not even one, who shall be able to decide between his brethren! 6 But brother prosecutes his suit with brother, and that before unbelievers. 7 Already indeed then it is altogether a fault in you that ye have suits between yourselves.”

I could give endless examples of how people have been manipulated by the hierarchy of evil spirits and by the devil himself…often in the Name of Jesus Christ, to manipulate and destroy churches and ministries. Just stop and think of a few of the more well-known ones trumpeted in the media, and then think of some you have known yourself. WE ARE AT WAR.

I have often said, “we can’t decide how people treat us, but we CAN choose how we respond.” We can choose to respond in a carnal, satanic-manipulated way, or we can humbly turn to the Word of God (1 Timothy 4:16) and respond in a way that pleases Christ. We have the choice, and God holds us responsible for our own decisions. Today, I choose to remember that the weapons I will fight with are SPIRITUAL and not CARNAL. I choose to remember that I am a SPIRITUAL creation, made in the image of God. Because of the sacrifice of Jesus Christ, I can…and I will overcome. I trust you will choose the same path.