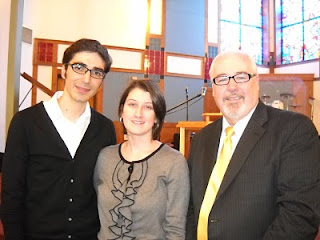 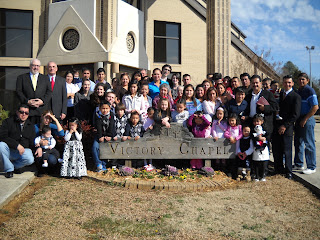 It is always a tremendous thrill to announce the establishment of a new church. This post shares a little about our latest.

On January 30, 2011 I met with the people of the Capilla De La Victoria (Victory Chapel) in Cleveland, Tennessee for the purpose of organizing and establishing what had been a mission work for well over two years. Previously, this group had met under the direction of Cliff Anderson in a part of the Peerless Road Complex. Pastor Tim Coalter (now State Presiding Bishop of South Carolina) shared with the congregation a vision of that local church planting two churches in the United States. We then joined in a partnership with the Tennessee State Office to share in the cost of rent and other needs for a period of two years.

Since the inception of the idea, there were several changes. Pastor Cliff Anderson felt the need of a change and Pastor Tim Coalter was appointed to serve in another ministry. At this time Omar Velazquez agreed to assume the leadership of the small mission along with his wife Abigail Spears Velazquez, who happened to be a recent graduate of Princeton Theological Seminary. As the group continued to meet, the congregation stabilized and strengthened and the 30th of January saw the completion of the vision.

I was joined by the North American General Presbyter, Bishop Sam N. Clements for the service. The service was conducted in Spanish with interpretation provided by Abigail. After addressing the group gathered, and sharing from the Word of God the purpose of our church…our commitment to the core values of prayer, harvest and leadership development, I asked for those desiring to join the new church to stand. At that time 62 people accepted the covenant of membership to become a part of this large family we call the Church of God of Prophecy.

Special thanks to Pastor Steve Wilson and the congregation of the Peerless Road Church for completing the commitment, and special thanks to Brother and Sister Cliff Anderson for the grounding work. Today we all celebrate, and we rejoice at the faithfulness of God. To Him be the Glory and Honor.