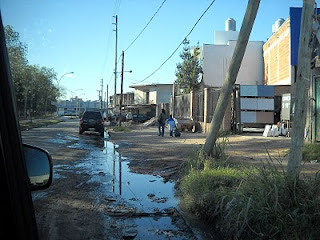 After an all-night flight from Atlanta, Georgia to Buenos Aries, Argentina, Debra and I arrived to find a cool, crisp morning. Because of the earth rotation, South America is starting into their fall of the year. After meeting with the National Overseer, Bishop Lopez, we left to visit two of our churches.

As you can see in the photo to
the left, this area of the city is very poor, and it is at times challenging to get around the city. When we arrived at the first church, the pastor and his family were happy to show us their church, and they were proud of the improvements they had made to the building, and spoke of the good things happening around them. It was o 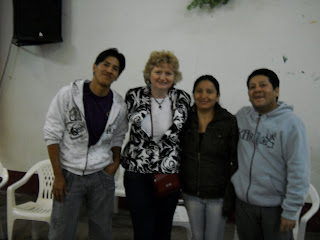 bvious they had a great love for the Lord and have a desire to reach their city for Christ.
In this photo, you see Debra with the pastor and his family. After visiting the church, they invited us to their home for a nice breakfast of salami, different types of bread, and
hot tea. We were so thankful for their hospitality,and for the time of prayer we had before leaving.
Our next stop was a local church in another part of the city, with the congregation being served by a lady pastor who had a great love for the Lord and a real dedication to the work. Sister Rosa walks over a mile seven-days each week to pray at the church, and minister to the needs of her community. She had such a great spirit and was so pleased to show us the church and the new construction going on next door to her current facility which is filled every Sunday.
She introduced us to some of the members of the church, and in particular one man who was the “self-proclaimed” biggest criminal in that part of the city before giving his life to Christ, through the efforts of Sister Rosa. He told us that she would call him in jail, and preach to him as he took notes…he then shared what she told him to the other inmates and scores of them accepted Christ.
It was fascinating to watch how he protected the pastor, and made sure she was safe. 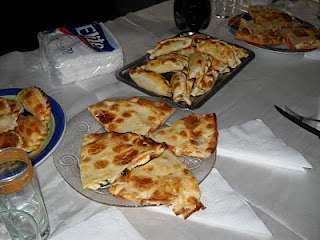 After visiting for a while, we were treated to some of the best food we’ve ever tasted. It was delivered by a member of the church, Brother Mario, who delivered it by bicycle. As best I can understand, it is called “tartas” and is something like a mixture of pizza and quesadilla. It was absolutely delicious. I am hoping the overseer of Argentina can talk him out of the recipe for it so we can do our best to recreate it at a later date.
After a short visit with Bishop Lopez and his family, we were off to a different airport, where we caught a flight to Mondevideo, Uruguay. More about that trip later.