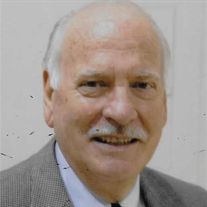 Bishop Richard Eugene “Gene” Davis, age 82, a resident of Cleveland, passed away Saturday evening in a local hospital. Bishop Davis was the son of the late Gladys Mae Ivy Davis and Clarence R. Davis Sr. His brother, Clarence R. Davis Jr. also preceded him in death. He was a U. S. Navy Veteran serving in the Korean Conflict. He was a retired minister with the Church of God of Prophecy with over 45 years of Service. He pastored in Mississippi, Oklahoma and Tennessee. Bishop Davis served as State Overseer for Eastern Canada, Ohio, South Carolina and Florida. He also served as Regional Overseer for the State of Tennessee. Later on he worked at the General Headquarters for the Church of God of Prophecy serving as Sunday School Literature Editor and the White Wing Messenger Editor. He also served as Administrative Assistant to the General Overseer under Bishop Billy Murray. Bishop Davis enjoyed writing Poetry, playing his banjo and guitar but more than anything he enjoyed personal evangelism! He was a member of the Keith Street Church of God of Prophecy.

Survivors include his wife of 61 years, LaVerne Davis of Cleveland, his daughter, Susie Fuerst and her husband Kevin of Ooltewah, Tennessee, his son, Rick Davis and his wife Lisa of Fort Worth, Texas, his grandchildren, Andi Hull and her husband Chris of San Antonio, Texas, Steven Fuerst and his fiancé Lindsay Genter of Ooltewah, Matthew Davis and Jonathan Davis both of Fort Worth, Texas and several nieces and nephews also survive.

The Remembrance of Life Service will be conducted Thursday February 12, 2015 at 7:00 P. M. from the Keith Street Church of God of Prophecy with Bishop Adrian Varlack officiating. Graveside Services and Interment will be held Friday February 13, 2015 at 10:30 A. M. at the U. S. National Cemetery in Chattanooga with family and friends serving as casket bearers. Military honors will be given. A Dove release will conclude the service. The family will receive friends from 5:00 until 7:00 P. M. Thursday at the Keith Street Church of God of Prophecy just before the service at 7:00. The family request that in lieu of flowers, Memorials be made to Global Missions, Ukraine Crisis Relief, C/O International Offices Church of God of Prophecy, 3720 Keith Street N. W. Cleveland, Tennessee 37312. Jim Rush Funeral Homes has charge of the arrangements. You may share your condolences and your memories with the Davis family at www.jimrushfuneralhomes.com.