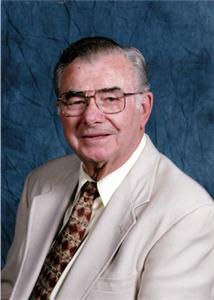 He was born on October 22, 1925 in Stedman, NC. He was married to Flora Laws for 66 years. They were married in Rossville, GA on September 17, 1946. William served as a minister and Bishop in the Church of God of Prophecy his entire life. He held numerous positions in the church, including as pastor in North Carolina and Maryland, and then as State Overseer in Vermont, New Hampshire, Massachusetts, Iowa, Delaware, New Jersey and Kansas. His last pastorate was at age 79 for 2 ½ years in Bonnettsville, NC. William’s only hobby was as an admirer and trader of automobiles and trucks. He is believed to have owned or traded over 100 vehicles in his lifetime and had a very keen memory of each one.

A Memorial Service will be held at Peerless Road Church 1200 Davis Drive NW, Cleveland, on Wednesday, June 5 at 11 a.m.

The family will be at the church for visitation from 10-11 a.m. on Wednesday, June 5.

In lieu of flowers, contributions can be made to the American Diabetes Society through www.diabetes.org as a Memorial Donation.
The Family wishes to extend special thanks and gratitude to the Signature Healthcare Hospice team for their care of our father.
Arrangements are being handled by Grissom Funeral Home, Mark S. Grissom, Funeral Director.