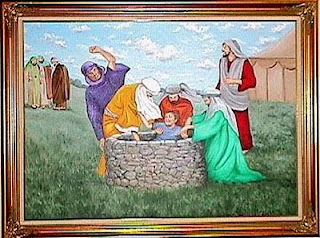 This past week, I’ve spent quite a bit of time in a character study of Joseph. This has been a fascinating study into the basics of spiritual formation. Joseph was the son of Jacob and Rachel (Gen 30:22-24) who seemed to be the favored child of his father (37.3) which put him in a terrible spot with his brothers (33:3-11). Because of his dreams, he was despised by them (37:5-10) and eventually sold into bondage. (37:12-28).

When studying Joseph’s life, it’s easy to see why he was such a special man, one who was favored by his father and elevated by God, despite the circumstances in his life. There are seven points to his story that are highlighted between Genesis 39: 2 and Genesis 50. I would like to share them with you today.

THE STEPS TO INTEGRITY

In the last few months, I’ve noticed that one of the most important lessons to be learned is that a Godly influence is everything. The Scriptures are filled with examples of Godly influence that has changed the lives of individuals and even nations, just as there are examples of “ungodly influence.”

Our reputation outside of the church is as important as our reputation in it. This is why Paul said that a Bishop must be “blameless” (Titus 1:7) as a steward of God. Notice his instruction to the church at Rome, “Thou therefore which teachest another, teachest thou not thyself? thou that preachest a man should not steal, dost thou steal? (Romans 2:21) We must be honest with ourselves and with everyone else.

Can you imagine how things would have turned out if Joseph had not had a greater commitment to personal integrity? One thing that is often overlook in this story is “exactly” what stopped Joseph form giving in. It was his integrity and his loyalty to the relationships in his life. He knew that if he were to give in he would have offended a) His God, b) His master, c) himself.

Think about that for a moment. He had been mistreated most of his life by his brothers, sold into slavery and now was about to invoke the wrath of a woman scorned, but his relationship with God was not dependent on how people treated him, but rather a deep commitment to have an authentic relationship with God. Secondly, his master owned him, and he wanted to do everything within him to not destroy that relationship. He did not make his decision based on the momentarily thrill of sin (Hebrews 11:25) but rather suffered. And finally, to give in would have been to betray his own conscience. We live in a day when it seems people’s conscience has been seared (1 Timothy 4:3) and they’ve lost all credibility. We must be true to our own integrity and walk in it. We do this by resisting temptation, knowing that if we “resist the devil, he will flee from us.” (James 4:7)

It is when we live out the first three steps and have a commitment to them that we find God’s favor. Now, I am NOT taking away from Paul’s advice to the Ephesians church when he told them they are saved by grace through faith (2:8-9) but rather that our actions have consequences. When those actions are corrupt and wrong, God CANNOT honor you, but when those actions are based on integrity and purity of heart God WILL bring favor to your life. Will you suffer? Yes, absolutely. Will you have troubles and trials? Yes, absolutely. Yet, you must remember that if you live godly in this world, you will suffer tribulation, but be of good cheer, for Christ has overcome the world. (John 16:33)

Again it would seem that dreams played a role in Joseph’s life, only this time it was SOMEONE’S dream and not Joseph’s. Probably the most overlooked moment in the story of Joseph’s life is the place that timing has. Because of his integrity, Joseph found himself locked in the prison and almost forgotten.

The Scripture does not go into a lot of details, but simply says, …”at the end of TWO FULL YEARS (Gen 41:1) that the Pharoah had a dream. When no one could give the interpretation that settled Pharoah’s heart, Joseph was remembered.

I’ve watched people for almost thirty years search for “a word from the Lord” but they’ve mostly looked in the wrong place. They thought, “if I can just get to this preacher or that preacher, this revival or that revival, I can find the answer.” However, the truth is that the answer has always been right in front of them…it is in the Bible, tucked away as a nugget of truth waiting to be discovered. This overlooked nugget of truth is that sometimes it takes a while to be delivered, it takes us getting in the right place, at the right time that God moves. This is the role of providence in our lives.

Instead of complaining, and often blaming everyone else for our problems, why don’t we just search the Scriptures and humble our hearts knowing that while man may forget us, God never does. Everything will work out in His time. (cf. Romans 8:28)

Admit it…while we don’t want to take the blame for our failures, we sure don’t seem to have a problem with taking credit for good things. We blame people, circumstances or the devil for the bad things, but we love to talk about how we “pulled ourselves up” by our bootstraps. We the arrogance that only man seems to have we say, “nobody did anything for me…I’ve done this all on my own….I’m a self-made man.” While the truth is that we can’t even make our heart beat the next time, or we don’t really decide if we will wake up in the morning. It is only by God’s will that we accomplish anything. Yes, you may have worked hard for the education, but it is God who allows your brain to function so well.

Joseph made sure that it was God alone who received the credit, the honor and the praise. We must guard ourselves, our thoughts and our actions that we never take honor that only God deserves. Because of what is known as “prevenient grace” even the very act of coming to God only happens when the Holy Spirit draws us to the Father. So like Joseph, we must give honor to God!

One of my favorite moments in the Scriptures comes in the book of Galatians. Yes, that book. The one that warns us against trying to complete in the flesh something that began in the Spirit. (Gal 3:3) The book where Paul talks about is didiche (teaching) and how he understood the things of God. He said, “But I certify you, brethren, that the gospel which was preached of me is not after man. For I neither received it of man, neither was I taught it, but by the revelation of Jesus Christ.” (Gal 1:11-12) and then in verse 16 he said, “immediately I conferred not with flesh and blood.”

You see, people can only help us so much, they can only teach us so much, there comes a place where Divine revelation is needed. It is during times of Divine revelation that long standing questions are answered, that the hidden nuggets of truth come through from reading and studying the Word of God. It is when we prayerfully and systematically dig away the layers that we find the richest veins of God’s truth for our life.

Like the archeologist, we must be committed to digging down through the layers that have been added over our initial faith, and get back to the relevant word for today. You will be amazed to find that it is not God who has changed, but it is we, ourselves. Remember, Jesus Christ is …”the same, yesterday, today and forever.” (Hebrews 13:8)

The conclusion to the matter is that a life of integrity will demonstrate certain steps to be proactively taken by every believer. We must live lives of integrity and honor that are dedicated to bringing honor and glory to God for all that is done.

We are not like this world and should not be conformed to it, but rather, we must be transformed by the renewing of our minds. (Romans 12:2)*