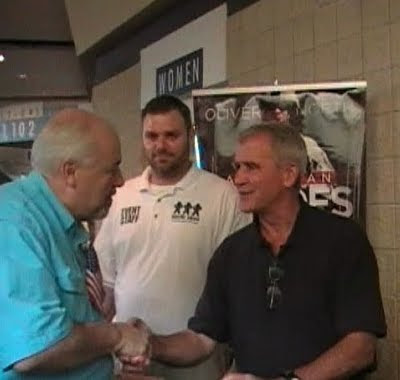 This past weekend, Debra and I were blessed to attend the Freedom Concert in Atlanta, Georgia. This concert weekend was a Christmas gift (from 2008) from our son and his family. Hosted by Sean Hannity and the Freedom Alliance it was a stirring tribute to the men and women who are serving our nation during the wars of Iraq and Afghanistan, and to raise money to provide education for the children of those killed in action.

One of the highlights of the weekend was my opportunity to have Lt. Colonel Oliver North sign a book entitled “Heroes,” and have a brief moment to meet him. I have to tell you, I’ve followed Colonel North since before the Reagan administration, and consider him to be a great American hero. His service to our nation in the United States Marine Corps and in the National Security Administration of the Reagan Administration, and most recently as an avid support of the United States Military and first responders. His efforts have been tireless to bring attention to the needs of our military and veterans.

When I finally met Colonel North, I stopped and saluted him. As I shook his hand, I looked him in the eye and said, “thank you for your service, God bless you for all you do.” His response was a humble smile as he said, “God bless you, I love you, man.” Now, that was the highlight of the day for me.

The concert featured several notables in the entertainment industry, actor Jon Voight, groups Charlie Daniels, Billy Ray Cyrus and Lee Greenwood. Among Christian writer/singers, the best for me was when Michael W. Smith sang and shared a testimony of God’s grace. He is an absolutely amazing musician and Christian witness.

An other feature of the night was a live feed from a forward-operating base in Iraq, and the families of the servicemen being able to video conference with their family on stage. Toward the end of the night, families of men killed in action were brought on stage and a great outpouring of love from the crowd of 20,000 plus stood on their feet.

Of course, the trip included two stops at restaurants we’ve wanted to visit for a long time, The Varsity (at the campus of Georgia Tech) where we had their famous hot dogs and the Silver Skillet, world-known for their biscuits and country breakfasts.

It was an enjoyable weekend that provided some downtime after an amazingly busy and stressful week. Thanks to the kids for making this possible.