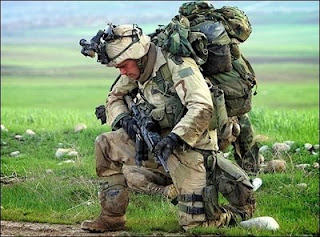 Some sleep in, others make the day a lazy one, watching television or movies, and just “kicking back” taking it easy. But for those serving on active duty, or veterans of the military services it is quite another day.

Its a day of remembrance for fallen comrades in arms. A day to remember the insanity and confusion of combat, and the extraordinary silence after a battle when you don’t even hear the bugs or birds…because they’ve all fallen silent in the face of the death and destruction of battle. Our nation earned its independence by fight a string of battles, consequent military actions strengthened the republic, from places in Europe, the Pacific Theater, Korea, Vietnam, Grenada, Somalia, Iraq, Afghanistan, and even the hallowed ground of our own backyards in a violent civil war (though there is nothing “civil” about war) when brother fought brother and a nation was turn upside down with political and military conflict.

While we spend our time at picnics, parties and other social gatherings, we must NEVER forget those who did not come home, their bodies lying in unmarked graves in Southeast Asia and other fields of conflict. We must NEVER forget the awful cost of war…the misery of human lives lost, the disease that follows the battles, the broken families, the children who are orphaned, and spouses who are left to mourn. Of the tears of mothers and the broken hearts of fathers, of the siblings who died on battlefields often difficult to pronounce correctly. We must NEVER forget the sacrifices, since we enjoy the freedom to worship, of speech, and the other freedoms guaranteed by our Constitution and Bill of Rights. You see, freedom is NEVER free…it comes at a great price…the price of blood and misery and sacrifice.

Across the world today, men and women serve us in the Army, Navy, Air Force, Marines, Coast Guard and intelligence-gathering and law enforcement agencies, and as first responders in our own land. They serve in embassies scattered to the four corners of the world. They are not here for the picnics, they are not here for the parties, but rather they choose to serve…to sacrifice, and for this we must forever be grateful. I know I am.

May God bless you and may God grant peace in our time…a peace that secures our existence as a Republic, as one nation under God.