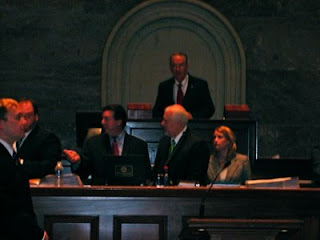 Yesterday, I posted about my trip to the Capitol to present the invocation to the 106th General Assembly of the House of Representatives. Now, I have to admit that the posting of the video on our related sites (Facebook, Youtube, Etc.) might seem a bit Narcissistic, so I thought today, I would share why this was so important for me personally.

During the battle of Nashville (December 15-16, 1864) my great-great grandfather served as a lookout in the Capitol dome. If one could look back to the geography of the time (prior to the urban sprawl) you could see that the Capitol building was a strategic point, and could be easily defended, mostly due to its elevation (one a hill). From the Capitol dome, one could see five miles on a good, clear day, and you could also see railroad and river traffic as well.
At our recent General Assembly of the Church of God of Prophecy, I could look down on the Capitol from our room at the Renaissance Hotel, so I pointed it out to my family and friends, sharing the story of my grandfather. During that time, especially at night, when looking on the dome from that vantage point, I wondered what thoughts were going through his mind. Was he afraid? Was he longing for the rest of the family? Did he wonder about his own mortality? Of course, these are questions we all have during trying times, and they are questions we should ask ourselves.
My grandfather survived the battle well, although he had been wounded at the Battle of Chickamauga (September 19-20, 1863), which is probably why he was in the tower, having suffered from a gunshot wound to his leg. His job was a particularly important one because of the necessity for commanders to have “eyes” on the battlefield.
Yesterday morning as I parked in the lower level of the garage, and entered the lower levels of the building, this was on my mind. As Debra and I met with Representative Ty Cobb, had photos made, I was still thinking about my grandfather. I was wondering what thought he might have been giving to his family, wondering whether or not his family name would die as a result of the terrible war ravaging the nation. Would he be proud to know that one of his grandsons was now in this place? As a Presbyterian, he knew the value of prayer and spiritual formation, and according to all we know, he was a “praying” man. Could it be possible that some 145-years later, one of his seed would stand in such a place? You see, prayers are answered, even when they take some time.
While sharing with another member of the legislature, Representative Johnny Shaw from District 80 (also an ordained minister) we talked about this and about how God answers our prayers, but often-times we must wait for the answer, and in truth we may never see the answer in our lifetime, but God DOES INDEED answer prayer.
And during the prayer, I concluded with an ancient blessing used by our ancestors from Scotland, still remembering my grandfather, and I thought it would be appropriate to share it with you. After sharing it, several of the legislators asked me for a copy of the blessing, and I happily shared it with them. I would also like to share it with you today:
“If there is righteousness in the heart,
there will be beauty in the character.
If their is beauty in the character,
there will be harmony in the home.
If there is harmony in the home,
there will be order in the nation.
If there is order in the nation,
there will be peace in the world.
So let it be.”
Thank you for taking time to allow me to share with you today. May God’s richest blessings be on you…today and forever, Amen.