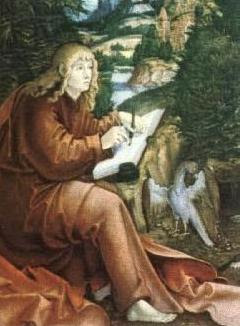 Like most ministers I know, I have a voracious appetite for knowledge. It seems that I am usually reading three to four books simultaneously. For the past several weeks, I have been studying the book of John. I ran across something that I found fascinating, and thought I would share it with you today:

In the early church, Eusebius tells us that John was banished to Patmos in the reign of Domitian (Eusebius, The Ecclesiastical History, 3:23). In the same passage, Eusebius tells a story about John that I had not heard before. Apparently, he received this story from Clement of Alexandria.

John was said to be a bishop of Asia Minor, and was visiting one of his churches near Ephesus. On one church visit, he met a tall, handsome young man who impressed him. John turned to the elder in charge of the congregation and said,” I commit that young man into your charge and into your care, and I call this congregation to witness that I do so.” (This may have been similar to our ceremony of setting forth a young minister).

The elder took the young man in under his care and mentored and baptized him, and received him into the church. Soon afterwards, the young man left the faith and fell into a career of crime. The leadership qualities John saw, was also noticed by the group of thieves and murderers who set him up as his leader.

Some time afterwards, John returned to visit the local church. We said to the elder; “Restore to me the trust which I and the Lord committed to you and to the church of which you are in charge.” “Alas,!” said the elder, “he is dead.” “Dead?” said John. “He is dead to God,” said the elder. “He fell from grace; he was forced to flee from the city for his crimes and now he is a bandit in the mountains.”

Immediately, John went to the mountains and deliberately allowed himself to be captured by the robbers. When they took him to the young man, who was the chief of the band, in his shame, the young man tried to run away from him. John, though an old man at the time, pursued him and said, “My son, are you running away from your father? I am feeble and far advanced in age; have pity on me, my son; fear not; there is yet hope of salvation for you. I will gladly die for you as He died for me. Stop, stay, believe! It is Christ who has sent me to you.”

The appeal from the aged apostle broke the young man’s heart, and he stopped, threw away his weapons, and wept. Together he and John came down the mountainside and he was brought back into the church and his faith was restored.

What a wonderful picture of love and courage from the old apostle John. As I read this, I found myself repenting and asking God to give me such a heart for people. I know that is God’s will for the church…let’s don’t give up on folks too soon. If Christ suffered shame and reproach, can’t we do the same?