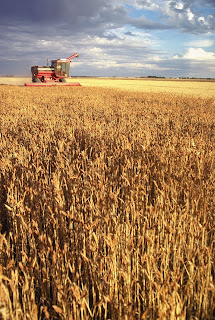 “Do you not say, ‘There are yet four months, and then comes the harvest’? Behold, I say to you, lift up your eyes and look on the fields, that they are white for harvest.” (John 4:35) Again today, I arose a little earlier than normal because of a meeting that was scheduled first thing. As I was waiting for the hookup to be completed for the meeting, I pondered what I would share with you today on this blog.

My mind went to the scripture quoted above. Now I’ll admit that you may have thought about, or preached this concept before, but I think I looked at it in a new way. Exactly what was Jesus saying?

Most theologians believe this event took place in either December or January, which was about four months before the spring harvest would be gathered in, somewhere around mid-April. The particular crops Jesus was using as an illustration would have been planted in November, and by now (December or January) the grain would have been pushed above the earth surface and was sprouting in a vivid green color.

Jesus had pointed out the Samaritan woman and the people of Sychar (“lift up your eyes”) who were at that very moment coming around him (v. 30) JUST LIKE THE RIPENED HARVEST growing around them.

Now, get this picture….

The people are coming dressed in their white clothes, standing out against the lush green background of the crops in the ground. The must have looked like green fields suddenly had “white tops” which was the sign that the green crops were ready for harvest.

Because Jesus knows the hearts of all people, he must have known about the ready hearts of the Samartans that were now gathering around him.

As I reflected on this today, I looked out my window to the people walking their dogs in our neighborhood, and the grass cutting crew in my neighbor’s yards. I saw other workers completing repairs on houses that were be placed on the market for sale. I look out my other window, and I see a steady stream of people driving their cars on the highway. I can see them everywhere….people who need the Lord, just trying to make sense of their lives, at the hectic pace of 21st Century living.

They are around you, too! People NEED the Lord! I am recommitted in my heart to reach this harvest…no, we don’t have to go half way around the world to find them, and it won’t cost thousands of dollars for airline travel, hotels and meals to accomplish this task. I am praying for the Lord to open doors around me, and when He does, I will walk through that door and share Jesus with them. I’m praying you will too!

Lift your head and look up….the harvest is all around you!