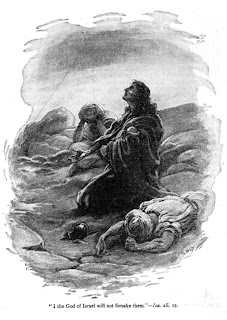 Recently, I’ve done a great deal of study on the topic of sin. I came across an old quote that I used in a sermon more than 10-years-ago….

“In all of the laments and reproaches made by our seers and prophets, one misses any mention of “sin,” a word which used to be a veritable watchword of prophets. It was a word once in everyone’s mind, but now rarely if ever heard. Does that mean that no sin is involved in all our troubles – sin with an “I” in the middle? Is no one any longer guilty of anything? Guilty perhaps of a sin that could be repented and repaired or atoned for? Is it only that someone may be stupid or sick or criminal- or asleep? Wrong things are being done, we know; tares are being sown in the wheat field at night. But is no one responsible, no one answerable for these acts? Anxiety and depression we all acknowledge, and even vague guilt feelings; but has no one committee any sins?

I must admit, that my musings were probably provoked by the latest scandal in the news. It seems as if sin doesn’t exist anymore…in fact, all the latest celebrity has to do is go to rehab…and within just a few days, they are miraculously cured….and not a word about their guilt! Because, after all, they weren’t sinners, they were just “sick.” It wasn’t their fault…

Yet, the more I think about this, the more I see a correlation between what used to be called sin, and what is now called dysfunction. As a former mentor of mine used to say, “what is called the new morality is nothing more than the old immorality.” (Harper Hunter)

The Scripture is our only “sure” word of prophecy(2 Peter 1:19), and it is by the Scripture that we will all give an account of ourselves (Romans 14:12).

Are you tired of “feel good” religion? I certainly am. I have grown weary of excuses for ungodly behavior, being clothed in the latest fad or fashion.

Someone recently tried to argue the point that the sheer size of the congregation proved the blessing of God on their ungodly behavior…that if what they were doing was wrong, then surely their church wouldn’t be so large….

Using their own logic, it would seem to me that professional wrestling, football, baseball, etc., must be the MOST BLESSED OF GOD if numbers are the only acid-test of right and wrong.

My dear friends, we can expect such behavior in the world….but NOT in the church.

Now you might wonder what has me so riled up…the answer is simple. The world is traveling headlong into hell, and many stand by idly doing nothing, saying nothing. Even much of what is now called evangelism is nothing more than social gospel, counting works as doing the will of God. What a shame….

My heart-felt prayer today is, “God…please! Send revival and send it now…without it we perish. Please join me in this simply prayer….it may just change our lives.