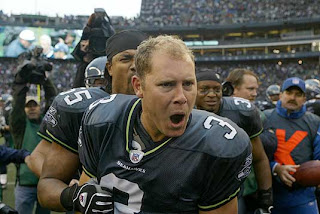 Tonight, I was able to get home in time to see the end of the Sunday Night NFL game between the Denver Broncos and the Seattle Seahawks. I love football, I just can’t help it, but what made this game such a pleasure to catch is to know that one of the members of the Church of God of Prophecy is on the field. Last year, on Super Bowl Sunday, I preached at Josh’s home church in the morning service, and I know that some of the folks from his church read our blog from time-to-time. Pastor Cabales and the whole church are a great bunch of people…especially at Super Bowl parties where they know how to cook a mean hot-dog and set up the Diet Pepsi one after another.

Josh Brown (Number 3) is the kicker for the Seattle Seahawks. He is a member of our church in Kirkland, Washington, and is not ashamed of his faith, or of his church. In a recent interview, he mentioned the Church of God of Prophecy church services.

Josh won the game with a field goal, his third of the night with only five seconds on the clock. It was a perfect kick…and as John Madden said, “Josh Brown has done it again.” The final score was 23-20 because of Josh’s three field goals. He also won games in the final seconds with the Detroit Tigers and the Saint Louis Cardinals twice.

At the conclusion of the game, Josh was honored (the first time for a kicker according to Al Michaels) by having his name put up on “the rock” of honor.

Way to go Josh, we are really proud of you! And we’re proud of our friends at the Kirkland church too!